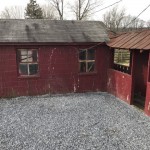 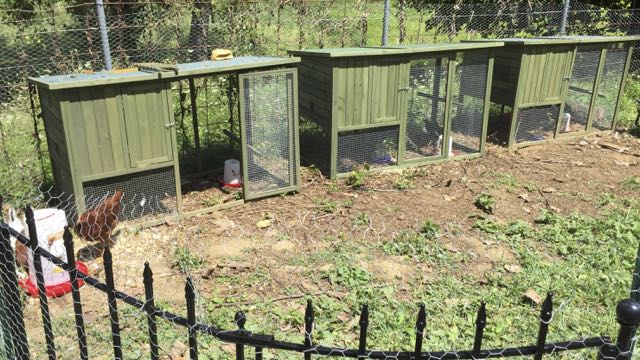 I started with only one coop, but by late summer, I had three

This is the first of a planned series of stories for the building of a market at the Homestead. The expected completion for the first phase of the market is Fall, 2017. More stories to follow soon…

How it all started

I started with just a few chickens in 2015 to see how it would be to raise chickens. By Fall of the 2015, when my first batch of chickens had matured and started laying, I realized how much I enjoyed caring for them. Listening to the roosters crow in the morning, and enjoying the company of the chickens as they roamed around the yard, and followed me as I did outdoor projects, encouraged me to get more.

In January of of 2016, with the larger flock of chickens, I realized I needed to upgrade the coop to something more reasonable for the number of chickens I had. The small coops I had did not offer the projection and space they needed. The coops I purchased where some inexpensive Ware coops, that did the job for a while.

The decision to upgrade the coop, and listening to my parents, could not have been a better decision. I spent a day setting up a pad for the new coops. The weather outside was getting colder and colder. The kind of cold weather that would freeze my hands in only a few minutes. The new coop arrived shortly after, and I busily started to make a run to go around the coop so I could quickly transport the hens. 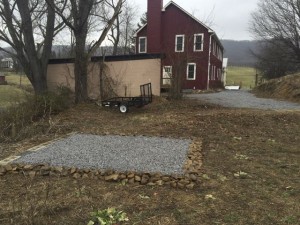 the pad created for the first coop was placed near the house, made out of stones from the yard and gravel

In the late afternoon sun, as I was putting the final touches on a covered run, the first snowflakes of snow storm began to fall. The completion of the new coop and run could was quite timely. The first few crystals of snow that fell on me as I finished the run, turned into monster snow storm. By the time the snow stopped, storm left 39″ of snow behind, burying everything. The original green coops, barely three feet tall, were only visible under the snow by the green roof that was just tall enough to stretch out from beneath the snow. The chickens would have been buried in their coops under the snow, but instead, they were safe and warm in the new insulated eight foot tall house. The drifts of snow reached the top of the 4′ metal run and the windows on the coop. The make-shift PVC and plastic sheet roof on the run had collapsed. I had to dig to uncover and resurrect the roof so the chickens had a place to roam.

When Spring arrived, the chickens began to produce a lot of eggs. They laid a lot more than I had imagined. I started giving eggs to friends and family. The gifting of eggs was not enough to keep up with their production. I often found myself with extra eggs. There were several times when I was not able to give them all away, so I threw the extra away. Fortunately, my new roommate became my first paying customer, and for many months, I was no longer threw eggs into the trash. 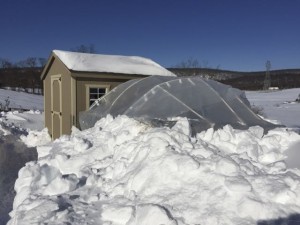 I dug a small pathway up to the run so I could get into the run to, and let the chickens out

The fresh eggs were so great, that my roommate decided to raise his own chickens, and by Fall of 2016 his hens began to produce eggs. My reliable purchasing customer no longer needed the dozens of eggs he used to buy each week. Over the winter, the hens egg production slowed, but never slowed enough that I wasn’t left with extra dozens of eggs. I began throwing away dozens of eggs. I was really bothered by throwing away eggs that I spent a lot of money on, and that my hens did a lot of work to produce. I figured at the least, it was time to start donating the eggs.

At the time, the thought had not occurred to me that I would be able to sell the eggs. Egg production was not really enough, or so I thought, to support many other people. I posed the question about donating online to community group in Round Hill. Not only did I get great responses on where I could donate eggs, I also had people to contact me to let me know they would be interested in purchasing eggs.

The responses for buying eggs made me believe that I would be able to successfully sell more eggs, and potentially make it profitable some day if I were able to produce enough. Between the online offers to purchase, and the discussion with Karen, who sold me the coops and runs, I was encouraged to start the market. I had not thought about using the milk house, until Karen told me how it could work.

The story brings me to now, today, the date of this post. I am sure the market will not be profitable anytime soon. After all, I am spending enough money to cover the costs of coops, runs, driveways, fencing, food, supplies, treats, bedding, the hens themselves, and the money that will be spent to set up the market, that sales of eggs for a few bucks a dozen will take many years to cover the expense. However, I am not in this for the short run, and the idea of starting a market had been on my mind since before I bought the house. The hens, the eggs, seemed like a good entry into the idea.

So, now I am preparing for the market. Below are a few shots of the very beginning of the process. Below shows the original area chosen for the new placement of the coop, new coop, and the protected runs. Lastly, now that the existing coop will no longer be located by the house, and across the creek, near the barn, a bridge was added so that I could walk from one side of the farm to the other. 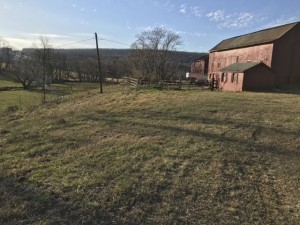 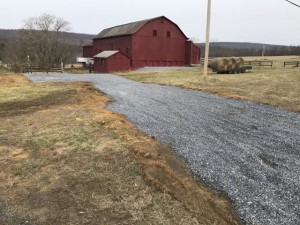 this is the side of the milk house that will be used for the market on the entrance side, which will include parking spaces and walkway entry 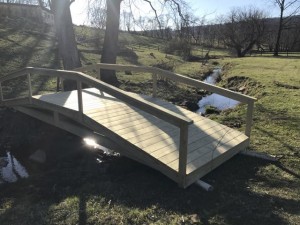